1 – From the Farming Cooks to the Families of Fortune, a NSW Migration Heritage Project

Many of our Hicks Family are descended from immigrants, who sailed from across the seas to escape poverty and to seek a better life. They include the parents of Mary Ann, wife of Thirroul’s Henry Thomas Hicks. She was a daughter of Alexander McKenzie Junior, who had brought his family on the bounty ship, “William Nicol“, from the Isle of Skye, in Scotland, to Ellengowan, near Wollongong in 1837.

From 1842, Henry Thomas Hicks‘ father, James Hicks, and other family members, were seeking a living, as they moved from the Windsor area near Sydney, initially to Russell Vale, and then Austinmer, in the Northern Illawarra.

From there, many Hicks descendants moved further afield – up and down the NSW East Coast, and into Queensland – from Bega up to Cairns in Far North Queensland. The majority seemed to head to the NSW North Coast, and they then married into quite a few other NSW North Coast families over the last 150 years, especially farming families. Click here to see more details where others of our Hicks family members have moved.

Two of Henry Thomas and Mary Ann Hicks‘ daughters, Margaret & Mary Alice, married two NSW North Coast farming brothers, Alfred & Alick Cook (see photo below of Margaret Cook and Mary Alice Cook). The Cook brothers were the 8th & 9th  of the 16  children of William Manning Cook, a Central Illawarra Council Alderman, who farmed on the “Benares” property in Avondale, near Dapto. It is understood that “Benares” property had been previously owned by Andrew Thompson, a prominent local landholder who was connected with the Brown family, another prominent local family.

Alfred and Alick Cook had both moved up to the Alstonville-Ballina-Richmond River area to make their own way into the future.  The Cooks became leaders in their communities, and Alick Cook was an elected Tintenbar Shire Councillor. For more of the Cooks’ stories on the NSW North  Coast – click here. 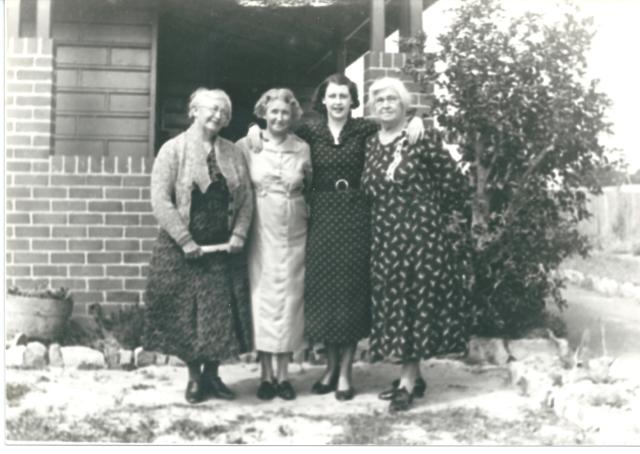 However, Hicks descendants have often married into other NSW North Coast families who were not on the land.

Julie Adams, who grew up in Thirroul, is one such descendant of Henry Thomas and Mary Ann Hicks. After leaving school,  Julie moved to the Hunter, and subsequently married into the Tong’s, a Chinese family of the Tweed. Julie’s mother-in-law, Olga Lock Lee, was a member of the Murwillumbah Tong family.

Julie is a great grand daughter of Edith Florence Joy (see photo above), a younger sister of Margaret Cook and Mary Alice Cook – all three were daughters of Henry Thomas and Mary Ann Hicks, of Thirroul.

Consequently, Julie and her husband Laurie Lock Lee‘s children have a combined Hicks, McKenzie and Tong heritage – the Tong’s, like the McKenzie‘s, had sailed to Australia seeking a better life. It is a family joke that the Tongs came out to mine for gold but they were too late, and so they were left to mine for tin !

In recent years the NSW Migration Heritage Centre, at Sydney’s Powerhouse Museum,  has undertaken studies on Chinese migration and heritage in NSW, including in conjunction with the Tweed River Historical Society.

Julie‘s family, the Murwillumbah Tong’s, was one of the families chosen to be studied for the “Families of Fortune – Chinese People in the Tweed” project.

Oral histories and interviews were collected from Julie’s husband, Laurie Lock Lee, and his relatives. A book, by Joana Boileau, (cover shown below) and a DVD, by Magli McDuffie and Pandion Productions, were produced  entitled “Families of Fortune” .

The DVD was shown at the 2013 birthday celebrations of Julie‘s husband, Laurie Lock Lee – click here to play it.

Photos from the 2009 launch of the “Families of Fortune – Chinese People in the Tweed ” book & DVD :

It is great to see the descendants of the Hicks-McKenzie-Tong’s having their Tong heritage so wonderfully covered by the NSW Migration Heritage Centre, at Sydney’s Powerhouse Museum.