Aunty Ida (Jummy)  Webb (nee Hicks) and Uncle Arthur Webb were the rich relations who kept up contact with Edith Florence Joy (nee Hicks), Mary Constance Callcott (nee Joy) and Joan Lois Adams (nee Callcott) for many years. Arthur was believed to be the executor of the estate of Edith Joy (sister of Ida). Amazingly there seems to be no photographs of  Ida McKenzie Webb (nee Hicks), also known as “Jummy”, in the extensive collection of family albums  that were held by her great niece, the late  Joan Adams (nee Callcott).

Joan’s eldest daughter, Kerrie,  can still recall that Uncle Arthur and Aunty Jummy had occasionally visited Joan and her husband Ross Adams, in their Redman Avenue Thirroul home until 1965. Joan would tell stories of how in the 1950’s, Uncle Arthur tried to point out the trains to Kerrie, as a toddler,  at Redman Avenue Thirroul. However Kerrie was too used to the train noises to take any notice. Kerrie also recalls her mother Joan’s deep sadness at Uncle Arthur’s passing in October 1966, whilst on an international cruise, and how he had to be buried at sea.

The second eldest daughter, Enid, died relatively young at 24 years, apparently in a horse riding accident whilst on holidays at Manildra in 1938 – she sustained a fractured skull and died a few hours later. Possibly this occurred at Arthur and Ida’s property, Ellengowan, which was at Manildra?

In late 1940 Ida and Arthur’s daughter, Ida “Mac” Webb, became engaged to Lieutenant Gerald Robert Bruce Knox, of Chatswood,  son of the late Canon R G Knox, who had been Vice Principal of Moore Theological College in Sydney.  The Knox family were very “big” in the Anglican Church in Australia. Gerald’s cousin David Broughton Knox was a Principal of  Moore Theological College for many years in the period of 1959-1985. D B Knox was a leading thinker of Reformism in the Anglican church –  and is still considered, by some, to be the father of contemporary Anglicanism within the Sydney Dioesce.  and Cousin D B Knox was married to Alison Loane and thus also a brother-in-law to Sir Marcus Loane, one time Anglican Archbiship of Sydney, Primate of Australia and also a WWII Kokoda veteran.

Son, Frederick Henry Webb, married Bette and lived at the Ellengowan property, at Manildra near Molong – their daughter Julie Anne Webb was born at Orange Base Hospital in 1950.

Youngest daughter Lois married John Willis Godwin (Jnr). He was a member of the Godwin family which had owned “Boronia House” in Military Rd Mosman. John’s grandfather, George Willis Godwin, had purchased “Boronia”  in the late 19th Century, and left it to his son John Willis Godwin (Snr). It was subsequently sold to Mosman Council in 1952, who used it as a library for many years. It was refurbished in 2012, and is now operating as a High Tea Room.

It was believed that Arthur was related to the very extensive Webb Family in Thirroul, according to family stories told by Ida’s great niece Joan Adams. Joan also said that Arthur Frederick Webb was from Wales, but somehow related to the Thirroul Webb’s  – and this is being investigated currently.  However so far it has been determined that Arthur was born in 1888 in Hirwaun, near Aberdare in, Wales to Frederick Webb,a coalminer, and his wife Emily (nee Rhys), .

Note from Kerrie Christian :  I understood that  Thomas Webb, the first of the Thirroul Webbs came from the UK. Yet Mum (Joan Adams)  was adamant that Uncle Arthur Webb was related to the Thirroul Webbs, especially the Akhursts. Unless of course the Thirroul Webbs and Arthur Webb’s family go way way back to Hirwaun Wales a very long time ago – and some inside the Webb family seem to suggest it is possible.

And like the Hicks,  the Thirroul Webb family also participated in the early sporting activities of Thirroul – see photograph of an early Thirroul Cricket Team – including Ida’s father, Henry Thomas Hicks, second from right in front row, and Daniel Webb, far right in back row.

Unsurprisingly, the intertwining connections in the late 19th Century – early 20th Century world of old Thirroul society  are more complex,  as it was moving from a farming society to coal mining, brickworks, railway, holiday guesthouses (eg Brighton Villa), retail and services : viz. the father in law of Annie Jones (Webb) was the son of Jacob Carlos Jones, whose boss, John S Kirton, married Florence Agnes Farragher, who was an aunt of Wilfred  Victor Farragher (whose mother was also a sister to John S Kirton), and Victor in turn was the brother in law of Ida Webb’s niece, Mary Constance (Molly) Callcott.

Into that highly interconnected post-WWI world of the small village of Thirroul would come the English author DH Lawrence, author of “Kangaroo“, who stayed at “Wyewurk” in Thirroul while writing his novel. “Wyewurk” was managed by Alf and Lucy Callcott, the in-laws of Ida’s niece, Molly Callcott. “Wyewurk” was then owned by Lucy’s sister, Beatrice Southwell.  Thirroul’s WWI Memorial, then located in front of the School of Arts Building, (later the Thirroul RSL Club, and now shops & businesses), which had been championed by Mrs (Granny) Riach, was mentioned in “Kangaroo“.  Some historians, including Thirroul local Dr Joseph Davis, have considered that “Kangaroo“, reflects in part the political connections that D H Lawrence encountered in his relatively short stay at Thirroul, whilst he was in the post WWI Australia in 1922. Certainly there were political activities across the spectrum in the area – from former soldiers, small business proprietors to coal miners. The interconnections would continue with their descendents, on to the late 20th Century and early 21st Century – working at same location, together in schools, churches  & sporting teams, shopkeepers & their customers, and also working together in Thirroul and Bulli resident groups from the mid 1980’s.

Meanwhile, in 1923 Arthur Frederick Webb, of the contracting firm Webb Brothers, built one of the early buildings at Bulli Public School, which had been established in 1869, in response to growing population from the emerging coal mines from around 1862. Arthur had been constructing public buildings all over NSW since at least 1917  (Coffs Harbour in 1917) – including Murwillumbah, Ballina and far, far more.

For many years Arthur and Ida lived at Cartref, 2 Tessa Street Chatswood, now the site of the Forest View Quality Care aged care centre, before moving to Hunters Hill.

In his role as NSW President of the MBA, Arthur had opposed Government Price Fixing of building materials and also lobbied in respect of the then proposed 1950 Government Bill to remove Communists from Trade Union Officer positions (Canberra Times 29/4/1950). Intriguing in that his brother in law Alexander Hicks had been president of the Illawarra Coal Employees Association about 50 years earlier. 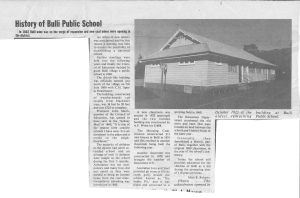 A painting of Old Bulli circa 1870’s – with the old Bulli Wesleyan Church, coal train, Slacky Flat (Mail Bag Hollow),  and what appears to be the original part of Bulli Public School (foreground) – note no development near sites of future JP Orvad’s Denmark Hotel, nor Bulli (Family) Heritage Hotel and St Augustine’s areas south of Slacky Flat (Mail Bag Hollow) area
Unsigned – however believed to have been either painted by, or for, one of the Hicks Family – possibly Mary Ann Hicks ?

Below is Uncle Arthur’s very fancy Austin, outside the Soudan St Thirroul home of wife Ida’s sister, Edith Florence Joy (nee Hicks). This photograph would have been taken from the late 1940’s-early 1950s.

Kenneth Charles Joy in front of his Uncle Arthur Webb’s Austin in Thirroul – circa early 1950s ?

More on Webb Family in Thirroul

The family of Daniel and Mary Ann Webb (nee Weinwright) :

The children of Edward and Annie Webb

5 Responses to 1 – Ida McKenzie Hicks and the Webb Connections